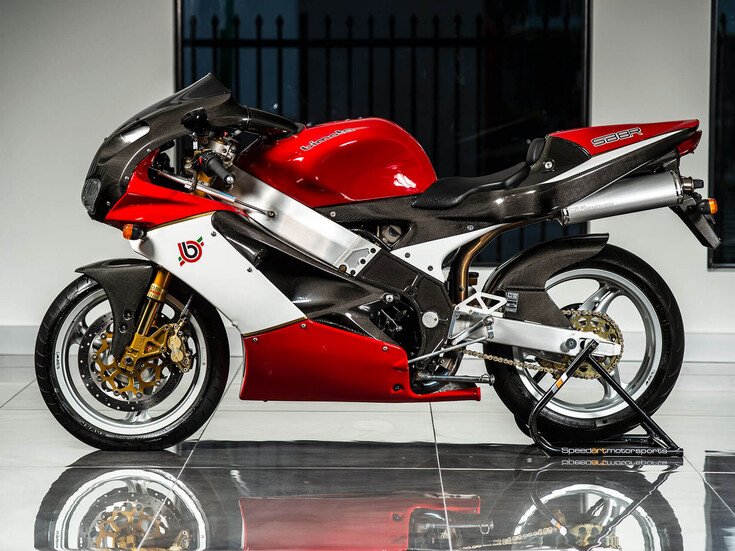 “The first thing you notice about the SB8R is the striking exotic looks, thanks to passionate Italian design, hand-built craftsmanship, and the advanced, for its time, use of carbon fibre.”

The name Bimota is derived from the first two letters of the names of the three founders, Bianchi, Morri, and Tamburini.

Massimo Tamburini crashed his Honda 750 at the Misano race course in 1972, breaking three ribs. Finding himself with time on his hands while recovering, he designed and constructed a tubular steel frame that would eliminate the flex and handling problems that plagued the high horsepower machines of all the large Japanese manufacturers. Bimota’s first model, the HB1, was the result of his work and vision.

Only ten of them were produced, starting when the company was formed in 1973. In the early years Bimota produced mainly racing frames, then began manufacturing complete high performance machines as well as ones in “kit” form. When the now legendary KB1 was developed, the company was assured of commercial success. Bimota continued to be at the very leading edge of extremely high performance motorcycle design throughout the 80’s, 90’s and into the new millennia on both the track and the street.

Now more than forty five years after the firm’s founding, Bimotas of any era are sought after throughout the world because of their beauty, technological superiority and exclusivity.

The SB8R was the first production bike to use carbon fibre in the frame. There is plenty more additional carbon fibre elements, including the unusual but effective air intake system integrated into the front fairing, tail assembly and more. Bimota used engines from other manufacturers and constructed their own frame and body work to give it less weight and improved handling over the “donor bike”.

The Bimota SB8R uses a Suzuki TL-1000 motor, with Bimota’s own fuel and exhuast system that resulted in 135 hp. The motor and special designed rear suspension give the bike perfect balance resulting in a machine that is a joy to ride.

Even though the SB8R was designed for the track, most owners (true in the case of this motorbike), used them sparingly, riding on nice days, and the occasional bike show. This Bimota has only 5,100 miles after 16 years of ownership.

From the total of 150 hand-built examples spanning a two year period only 69 SB8Rs were exported into the US. It is questionable of how many are still in this pristine and original condition. Upon a closer examination it is easy to attest to the claims that it’s never been tipped over or any evidence of track time.

Speedart Motorsports is pleased to present this time capsule original SB8R in the configuration it left the factory in Rimini with a couple of small modifications in order to improve the ownership experience.

The light switch was modified so the headlight can be turned off, foot-pegs were replaced with European fixed position pegs, and the fueling system was modified to make it more rideable in street configuration.The fairings have original paint, carbon fiber parts have no cracks, all lights, turn-signals are original and working, tires have little wear, although they are at least 2 years old, so may want to consider replacing.Shocks don’t show signs of needing seals, engine has no leaks, runs great, once it warms up (these are cold-blooded beasts). Brakes have plenty of wear left, recommend oil change for the engine, something I intended to do, but haven’t made time.

This bike was purchased new from Ducati Bellevue on 3/2/2002. The 1st owner was a local Seattle aerospace engineer who rarely rode the bike. The last owner purchased the bike on 2015 prior to Speedart Motorsports acquiring the Bimota.

The 1st owner made only one modification to this machine. His one mod was having a custom fuel trimmer or potentiometer made to work with the existing wiring harness. These bikes were known to have fueling issues due to the massive throttle bodies and this is where the potentiometer helps out. Unfortunately the potentiometer is old technology and the adjustment range was limited. The second owner installed a PCIII that was tuned by Nels at 2 Wheel Dyno Works in Woodinville, WA.

PCIII was installed by second owner to permanently wash out some of the fueling issues that was typical of the SB8R model and its huge throttle bodies. This bike accelerates easier through the rev range than before. The fuel trimmer that had been installed by the first owner was only finite and could not adjust or reach some of these issues in the rev range. This modification alone makes it rideable even in heavy traffic.

As previously mentioned, the first owner added an out-of-production Evoluzione SB8R fuel trimmer provided by a Bimota enthusiast in Colorado. This unit is more precisely calibrated with nearly infinite settings between 0 and 999. The Bimota trimmer has 8 positions total.

The stock tank on these SB8R’s is an Acerbis tank. The tank that’s currently installed on the bike was sealed and lined by Russ Foy in late 2014 to prevent any tank expansion. Furthermore braided steel clutch and brake lines were fitted in lieu of the stock rubber.

The sale of this race bred super bike is accompanied by owner manuals, service books and two keys.

The fortunate new owner will receive a galore of unobtainium spare parts worth thousands of dollars and who are no longer available. Such spares include, composite full fairing skins that can be painted with the desired livery suitable for racing, extra monoposto seat, additional OEM Acerbis Tank, OEM full exhaust system with silencers, lithium battery charger, rear pit stand and more, making this acquisition the ultimate SB8R package. 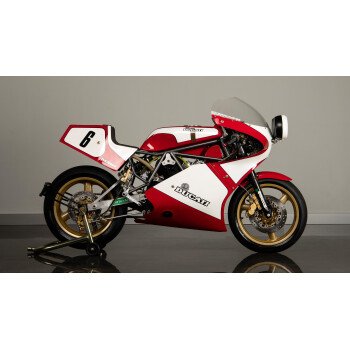 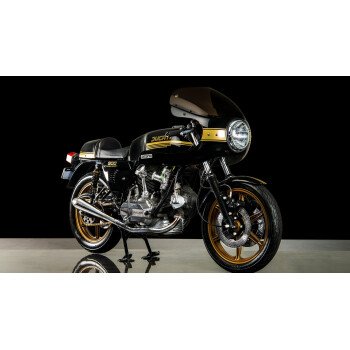