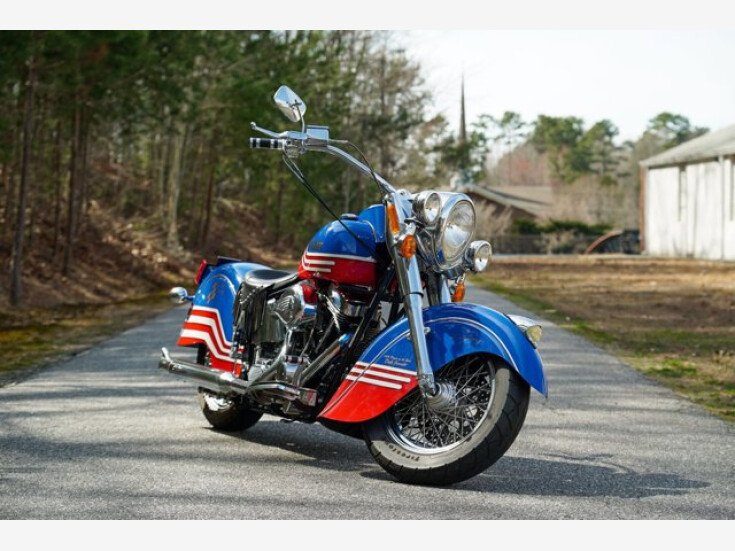 This 2000 Indian Chief was given to Quality Care Ford #88 driver Dale Jarrett in 2000 for being the 1999 driver of the year in the NASCAR racing series. It shows only 9 miles and to our knowledge has never been driven other than to maintain lubrication over the 22 years of its life. It has an S&S air-cooled four-stroke 1442cc V-Twin powerplant paired to a five-speed manual transmission and can produce a claimed 75 horsepower at 5200 rpm. It also comes standard with features such as full-coverage fenders, a 4.8-gallon dual fuel tank, a single Corbin leather seat, pull-back handlebars, a large, chrome headlight with auxiliary headlamps, a suspension package composed of a chromed telescopic fork and a hidden mono-shock rear suspension with a single right-side exhaust. From 1998 to 2001 Indian gave the NASCAR Champion of that year a new Indian Chief painted like their Race Car. The first one in 1998 was given to Jeff Gordan and was given a new 1999 Chief. The next one was Dale Jarrett, winning the 1999 Championship and received this particular 2000 Chief. Bobby Labonte received a 2001 and Jeff Gordan again received the final one for winning the 2001 Championship and getting another new Chief, this time a 2002 model. The Indian Factory in Gilroy California also built a twin of each of these motorcycles to keep in their collection and all 4 of these factory bikes were sold off at a later date to private collectors. This Chief was the Factory Dale Jarrett Chief and is one of the rarest Indian Motorcycles ever produced. Contact Kennith Stewart at 803-283-7289 for more information

EmailEmailDirectionsWebsite
Suspect Fraud?
Contact Dealer
Feedback
Login
Become an Autotrader Dealer
© 2023 Autotrader, Inc. All Rights Reserved. "Autotrader" is a registered trademark of TPI Holdings, Inc. used under exclusive license.
By using this service, you accept the terms of our  Visitor Agreement.  Privacy Statement.  Do Not Sell My Personal Information.  Do Not Process My Sensitive Information.  AdChoices  Accessibility Statement
›