Utility Motorcycle for sale by Clawson Motorsports in Fresno, California 93710 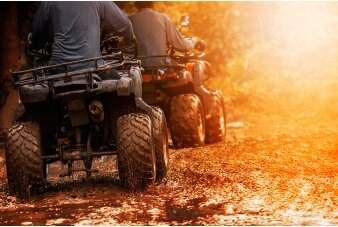 Less is more—we’ve all heard that before. But when you’re looking at a hard-working ATV without an extra ounce of fat, well, that’s the Honda FourTrax Recon. It’s distilled Honda quality and performance in a package that’s right-sized for plenty of riders.

The Recon is a powerful, versatile, rugged ATV, but one that also offers a smaller overall footprint. It’s a powerhouse of an athlete in the welterweight division. A specially designed 250-class engine is engineered for plenty of low-rpm torque and power, where the real work gets done. Its two-wheel-drive layout features Honda’s famous longitudinal engine design for more efficient power transfer.

Plus, the Recon is available in two different models: one features our conventional foot-shift ATV transmission, while the Recon ES offers Honda’s Electric Shift Program (ESP), which lets you upshift and downshift using two handlebar-mounted buttons.

Sized right, built smart, and engineered to last—with the Honda Recon, you go big where it counts.

With the press of a button, the Recon is up and running, thanks to an effortless electric start. Want a backup? No problem—it also has an auxiliary recoil starter.

We never stop making the Recon better, and here is one example: Need to get out of a tight spot on the trail? The Recon sports a reverse lever that’s designed to be simple and easy to use.